I am joining Jenny Matlock's Saturday Centus. Each week we are given a prompt, a phrase in which to design a story or poem around. We are limited to 100 words, not counting the prompt. This week's prompt is “Objects in the rear view mirror are closer than they appear”. You are allowed to use the prompt anywhere within your writing, but it must be used "whole", not split up. 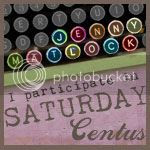 RETROSPECTION
He sat in the passenger seat of life ruminating about his present circumstance. He thought this was what he wanted but now he wasn’t so sure.
Memories, carefully buried long ago and thought to be forgotten, were now making themselves known; memories that may hold the answer to the puzzle of why he chose this particular path.
He had not wanted to ever remember. However, years of running from his past, drowning his sorrows, and drugging the pain no longer worked. He was out of tricks.
With new-found determination he opens the window to his past. “Objects in the rear view mirror are closer than they appear”. Ain’t that the truth.
Posted by Unknown at 2:38 PM

Makes me want to know more about this guy and what he's been through. Good Centus.

good take on SC, nice story of a man who might be in some mid-life crisis or perhaps thinking of a change in his life

Always hard to face our own truths..seems he was doing it.

Just gotta look at the demons in that mirror, as close and as large as they might appear, and realize that they can't hurt you - as they are behind you now.

better to face them than let them dog your coat tails...nice one polly...

Intriguing! Now I want to know more about what his new-found determination is..

Love your spin on the prompt ... very philosophical.

You give us the framework without the content.
But that way the reader keeps asking questions.
Well-written.
Best wishes,
Anna

Think some of us can relate to "the passenger seat of life."

Great take on it this week..

Life, etc. I liked this one!

I want to know the whole story! Love this one!

Really nicely done. You've conveyed so much about this person in so few words. Love the line "passenger seat of life". Kat

great! you caught the readers attention from the very first line! not always easy to do!

June Freaking Cleaver said it all for me. Great post. (And thanks to June).

Good take on this - it's amazing how we all use it so differently!

Very good. I'd love to find out more of this man's story.

Wow, this was a very impressive story! Very well done!

You said so much about your character in so few words! I especially like the "passengers seat of life" line. Really great job!

Been there and back. Until the past is truly left in the past, all things appear bigger than they really are.

and I have to wonder how he felt when he opend that window?

Polly, I loved this.

Such a true little story about so many times in life.

I really enjoyed your thoughtful use of this prompt.

Darn girl. Now you have me thinking.

Polly, I loved this.

Such a true little story about so many times in life.

I really enjoyed your thoughtful use of this prompt.

Darn girl. Now you have me thinking.

Welcome to my little corner of the world: a comfy, creative spot to explore art, poetry, story telling, photography, and musings (sometimes silly, sometimes not).

All posts and photos, unless otherwise noted, are copyrighted by The 5th Sister on the date published. Please ask permission before you share.

Promote Your Page Too